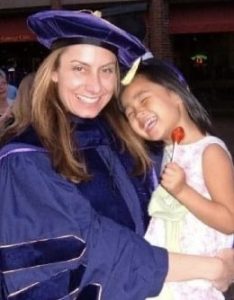 I started my PhD later than most, in my early thirties. At the time, I had visions of doing research that would guide organizational decision-making, and of teaching the next generation of businesspeople.

On the cusp of taking exams two years later I had decided I wouldn’t stay in academia because the pace was too slow for me. Take a couple of years to research and write a paper, submit until you get a revise and resubmit, revise for ages, and years after starting the project see it published (if you’re lucky!). Not for me.

I wanted to finish with a degree, though. There was a magic to those letters, to proving not only that I was smart enough but that I had the grit to see it through.

And I rarely felt smart enough. While freaking out when studying for my exams, people tried to help: “Don’t worry, nobody ever fails.” Those words should have been encouraging, but all I heard was that I might go down in school history as the first failure. I doubled down and studied harder, so much that I’m pretty sure I memorized not only every important research study of the past 60 or so years, but the unimportant ones too. So much that at an awards ceremony a few months after I passed, I received an award based on my exam scores. A few years later a newer student asked me “Did you know we all used your exam answers to study for ours?”

Exams over, I started building my consulting business full time while also working on my dissertation and teaching a full load of college classes (I had to teach, or I’d lose the scholarship that covered tuition, health care, and basic living expenses). I had my hands full, and they started to overflow when I adopted my two-year-old daughter and added parenting to the mix of daily activities.

Fast forward a couple of years, and I finished my dissertation. A month before my dissertation defense, my (then) husband announced that he was moving out. A month after, my thirteen-year-old dog died. Days that should have been happy were very dark. A good friend told me “These are the days you’ll look back on and, well, you’ll be glad you’re looking back on them” and those were the wisest words I’d heard before and maybe since.

It was a beautiful spring day when I crossed the University of Washington campus to hand in my signed-off and officially approved dissertation. I found the administration building, handed my heaping pile of papers to someone at a desk, and as I opened the door to leave she yelled “Make sure to have a kiss!” I turned around and saw her smiling and gesturing at a bowl of Hershey’s kisses wrapped in bright UW colors. As I took the candy, she happily told me “Everyone who earns their PhD gets a kiss!”

I left the building and found myself both laughing and crying hysterically on the walk back to the car. This was the moment I had been working toward for years, and during those years I’d gained the degree and a daughter but lost a dog and a man. I had finished what I thought were the hardest years of my life only to realize I had just been warming up.

Years later my advisor asked to use my dissertation data to leverage it for a project. Before handing it off I re-read it and I was floored. Somehow I had forgotten all the work that went into building my theory, the many months of back and forth to get my experiments approved and completed, and the difficulty of the crazy statistics I had to learn to actually complete my analyses and propose my findings. So much work, but it wasn’t until years after it was complete that I actually understood and appreciated the enormity of what I had accomplished.

I’ve done things in my life I’m proud of. One of those things, possibly the hardest but far from the most important, was earning a PhD.

So if some guy who never actually earned a PhD wants to tell me I don’t get to call myself doctor, it says more about him than it will ever say about me. He wants to take something from me that can’t be taken. I earned it, and while the scars can’t be seen I can assure you I have a few, even still.