Want to be more confident? Do these 3 things now. 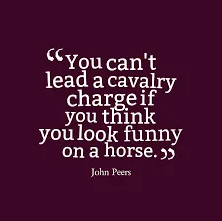 He can inspire a group only if he himself is filled with confidence. Floyd V. Filson

When I tell clients that confidence is an important characteristic of good leaders, they’ll often get worried. Sometimes it’s perception: “It’s hard to be confident,” they’ll tell me, “when half the time I feel like a fraud, just waiting for people to figure out I’m not qualified.” Other times it’s based on their past: “Ever since I [lost that sixth grade election/got turned down for a date by the prom queen/didn’t get promoted to Chief Sandwich Artist], I’ve felt like a failure.” Some aren’t even sure what’s causing their lack of confidence, but they recognize that it’s missing.

Instead of concern, I encourage them to get excited. Of all the characteristics that correlate with leadership skills, confidence is one of the easiest ones to tackle. Don’t believe me? It’s much easier to change than your height, amount or color of hair, or timbre of your voice.

So, what can you do to quickly enhance your confidence, thereby increasing the odds you’ll be selected for leadership positions and eventually succeed?

You’ve probably heard of the reptilian brain, which not only controls some basic vital functions but which gets most of the credit for the “fight or flight” response that is triggered by fear.

When faced with a threat, that lizard inside of you rears its ugly head and gets you entirely focused on addressing the threat, which usually means fighting, fleeing, or freezing. It should come as no surprise that your lizard isn’t the brightest creature, so the threats it senses aren’t necessarily life-or-death situations that require the fight-flight-freeze response.

A car swerves into the sidewalk toward you? Flight is a terrific response, and the lizard should be thanked. Your boss casually mentions an upcoming re-org? The lizard’s response isn’t warranted, but it’s hard to convince that little reptile not to freak out.

But how to shut down the lizard brain? A very quick and effective method is to engage the non-lizard brain by thinking (as opposed to reacting), and an easy way to do this is to name your fear. That’s right: the simple act of telling yourself what’s so scary moves you into conscious thinking, which acts to quell your fear.

Next time you’re seized with fear, just take a deep breath, name the fear, and watch as it slowly dissipates.

We humans are thinkers, ruminators, and rationalizers. We constantly make sense of the world around us through these rationalizations, even when we don’t realize we’re doing it. And since we pay attention to them, our thoughts feel real, when in fact they’re just a product we create out of thin air.

One approach to managing thoughts that aren’t helpful is to ignore them, and while a worthwhile goal, it’s really hard to do (just ask anyone who’s ever tried meditation).

So if damaging thoughts aren’t real, why not just change those thoughts by telling yourself a different story? It might sound too easy to be true, but it really does work.

For example, one client is told she didn’t get a promotion because someone else was a better fit. When asked to explain, she says: “I’m just not good enough at what I do. The person who got the promotion is better, and I don’t think I’ll ever move up in this company.” The client may believe this to be true, but it’s just a thought that leaves her feeling dissatisfied, stuck, and pretty darn unmotivated to keep working hard every day. More importantly, since we humans seek consistency between our thoughts and our behaviors, she’ll likely start behaving like a person who isn’t very good at her job, and who isn’t worthy of a promotion. It might be crazy, but it’s how we’re wired.

But if this belief is simply something she’s created to make sense of her situation, then why not flip the script? “I didn’t get this promotion because the job isn’t perfect for me – but I’m really smart and I know there’s a better opportunity.” “My boss was threatened by how good I am, but I can find another opportunity working for someone who appreciates my strengths.” There are millions of stories she can tell herself, so why not pick a story that makes her feel good, and motivated, and accomplished?

While it may feel like wishful thinking or outright lying, the truth is that everyone makes sense of the world through stories, and those stories are totally made up. So why not make up a story that helps, rather than hurts?

One fascinating truth is that confident people are comfortable taking action, but loads of people take action even when they don’t feel confident. In fact, confidence doesn’t mean you’re fearless, but rather means you’re comfortable facing your fear and moving through it, and what we know about human psychology is that moving through our fears lessens or even eliminates them.

So action is, in fact, a fear-buster and a confidence-builder. It’s easy enough to say to “take action,” but practically speaking, what does that mean? It means you’ll need an idea of what’s killing your confidence and a plan for getting around it.

One common issue I’ve seen is people whose confidence prevents them from seeking a raise. While there are some things they can do to get ready to take action (researching salaries, for example), at some point they need to take the action of asking for the raise. There’s just no getting around it. And while it might be scary, the mere act of asking for it will increase their confidence regardless of the outcome. They can improve the whole experience by naming their fear in advance (“I’m really afraid my boss will think I’m greedy”) and by creating positive thoughts regardless of the outcome (“I know I’m worth that salary, and I’ll keep working to improve my earnings even if I need to leave this job”).

Confidence is a critical characteristic of effective leadership that can be improved by: